Macadamia shell has many uses, including: 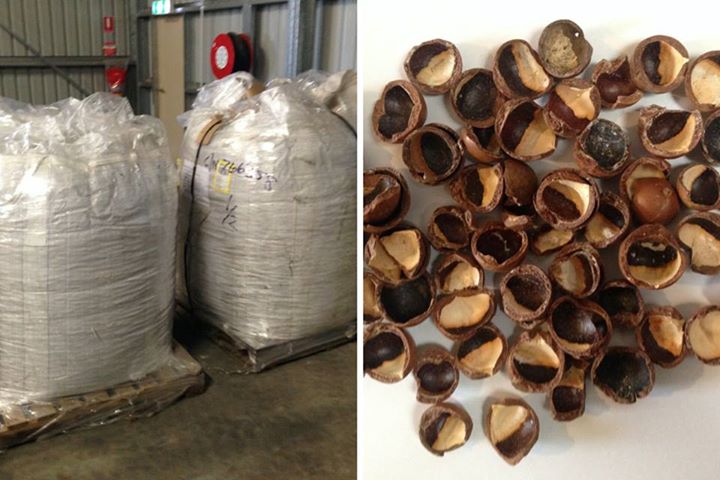 The objectives of the processing were to assess:

We began the process by feeding the shells into a delivery auger which drops material into a hopper. The pyrolysis auger then moves the material from the hopper along the bottom of the pyrolysis zone where it is heated. The heated material carbonises and gases bound up in the material are released. These gases are mixed with introduced air and combusted, creating heat which is sufficient to maintain the process, with excess heat vented up the flue. The carbonised material (biochar) is removed, quenched and collected.

It did take us some time to “learn” how to char the shells. Initially, because uncharred shells were coming out through the feed-out auger we were feeding any unprocessed shells back through the process.

We achieved process temperature by moving the shells through the machine slowly, using the diesel burner to heat the chamber. Once gasification was established along the length of the kiln and we were confident the temperatures could be maintained, we turned the burner off and the process was self-sustaining.

Initially, the shells caused a lot of noise in the feed-in, pyrolysis and feed-out augers and seemed to make the machine “work” very hard. However, as the time of processing increased, the noise level dropped. We suspect that the fact the kiln had not been used for a few weeks, the insides of the augers were rusty and needed some time to settle in. Once this problem was resolved, there were no significant handing issues.

Macadamia shell biochar discharged from the kiln was immediately quenched using fresh water. This is critical to avoid the hot biochar from igniting when it contacts the air. It also aids with handling of the biochar post discharge. 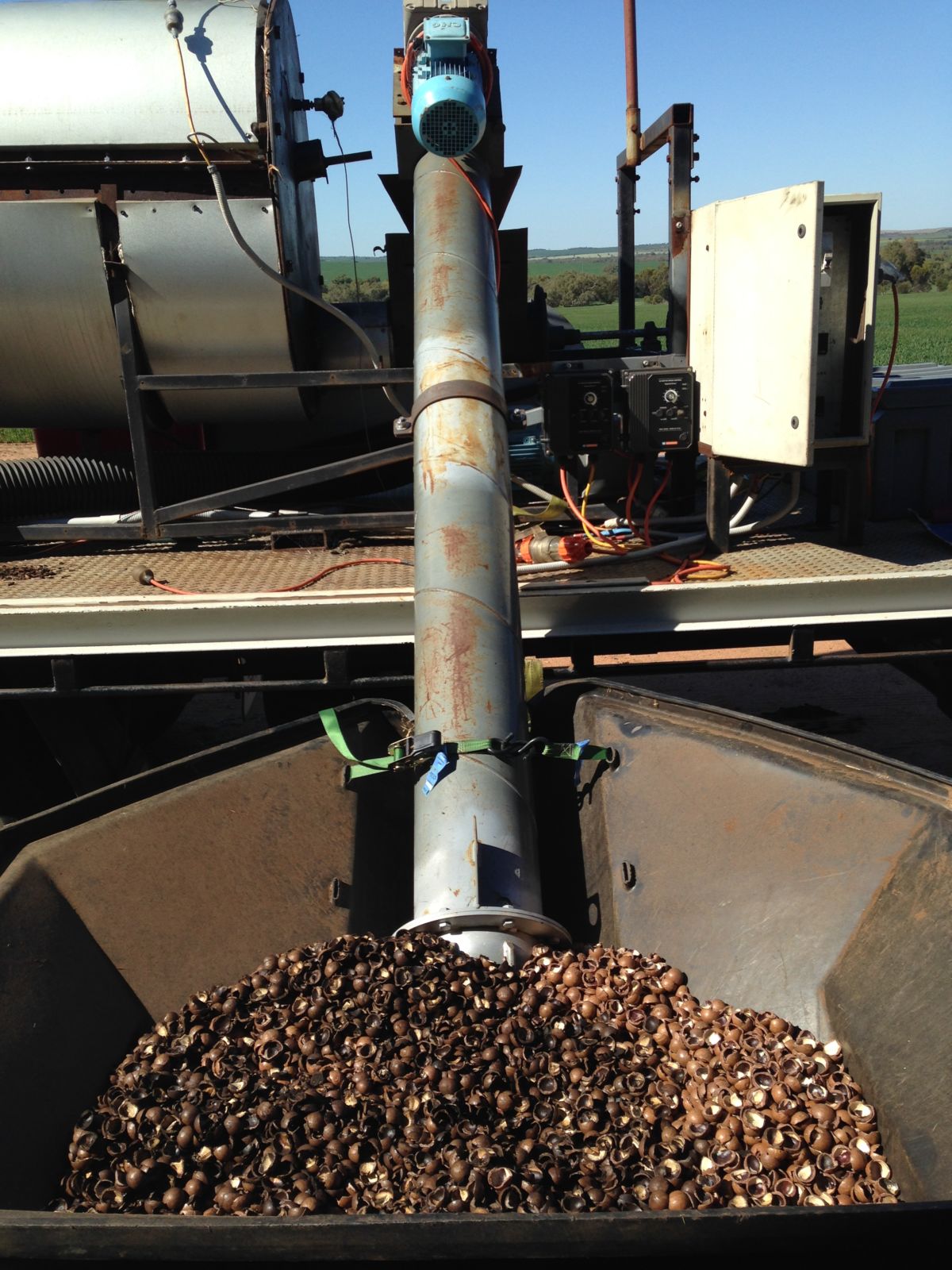 Prior to processing, unprocessed shells were loaded into 60 litre drums, weighed and an average weight taken. Each drum contained approximately 23 kg of shells. By recording the number of drums of shells loaded into the hopper and the time intervals at which they were loaded, we were able to calculate the feed rate of shells into the kiln. 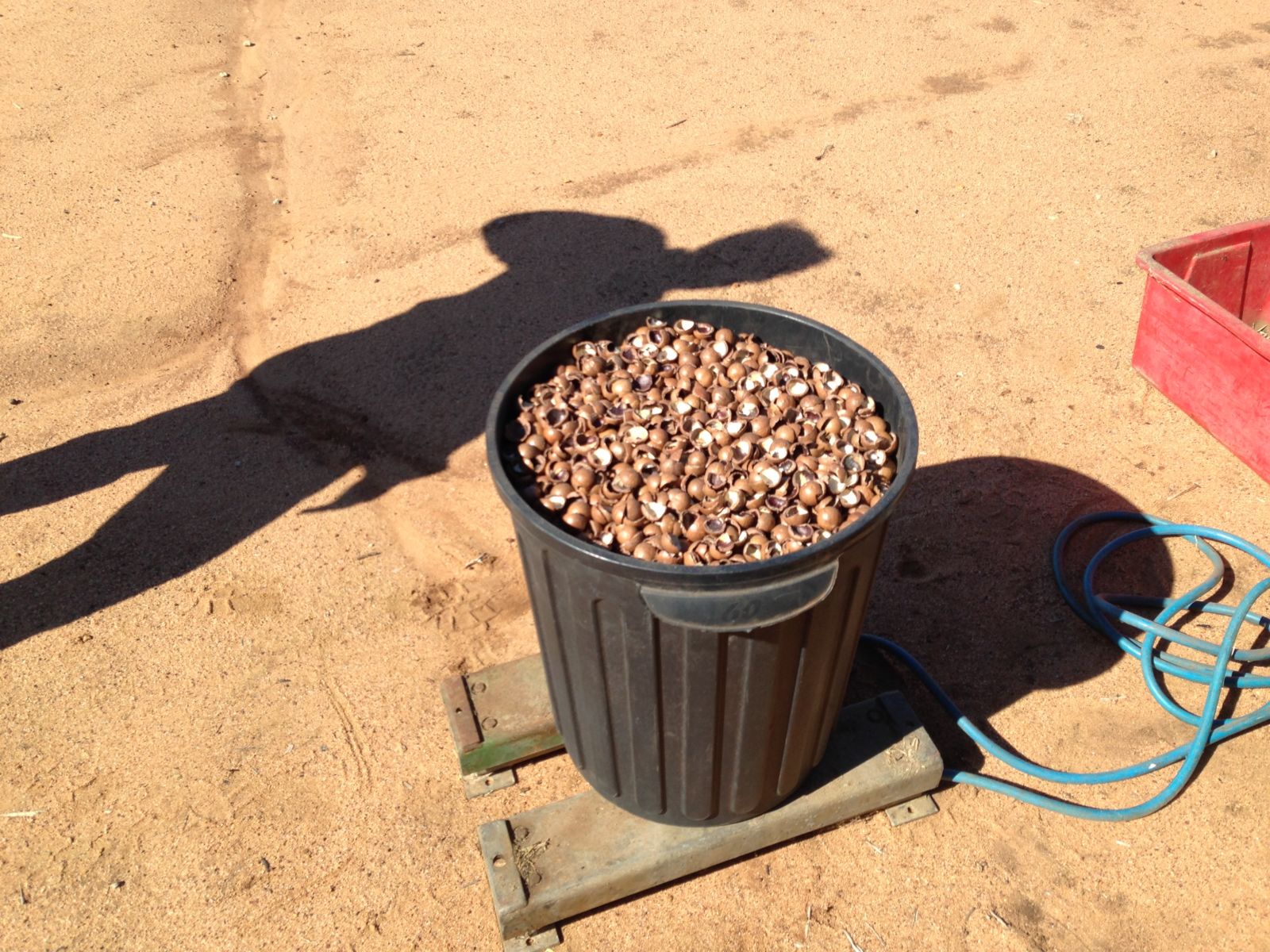 In order to determine the quantity of macadamia shell biochar produced, we weighed the quenched biochar, took a representative sample and performed a moisture analysis. Moisture analysis is performed by weighing the sample, then heating the sample for short periods of time and weighing each time. When the weight of the sample stops decreasing, it is assumed that all moisture has been driven off, therefore the remaining weight is dry material only. The difference in weight therefore represents the moisture content. 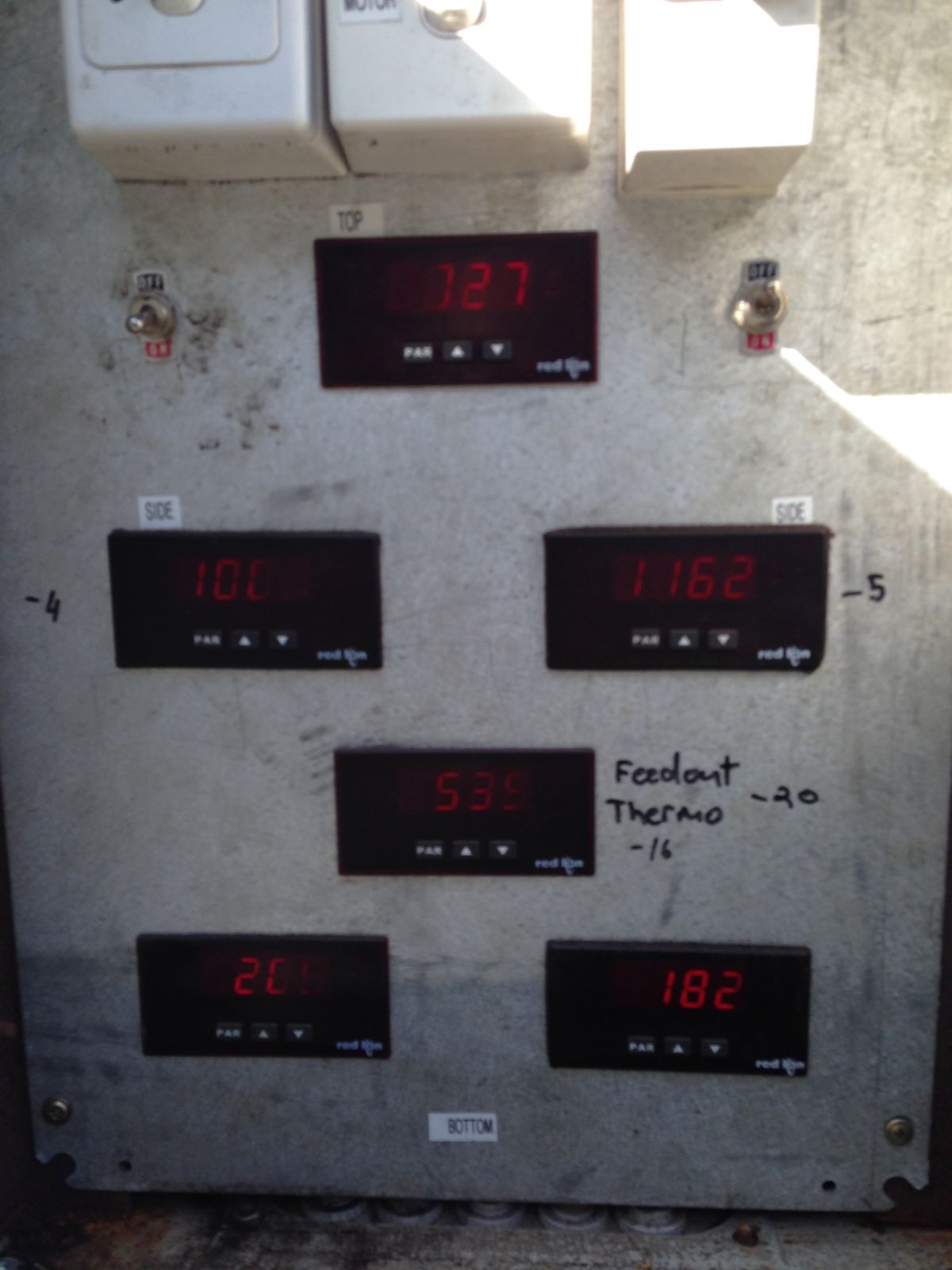 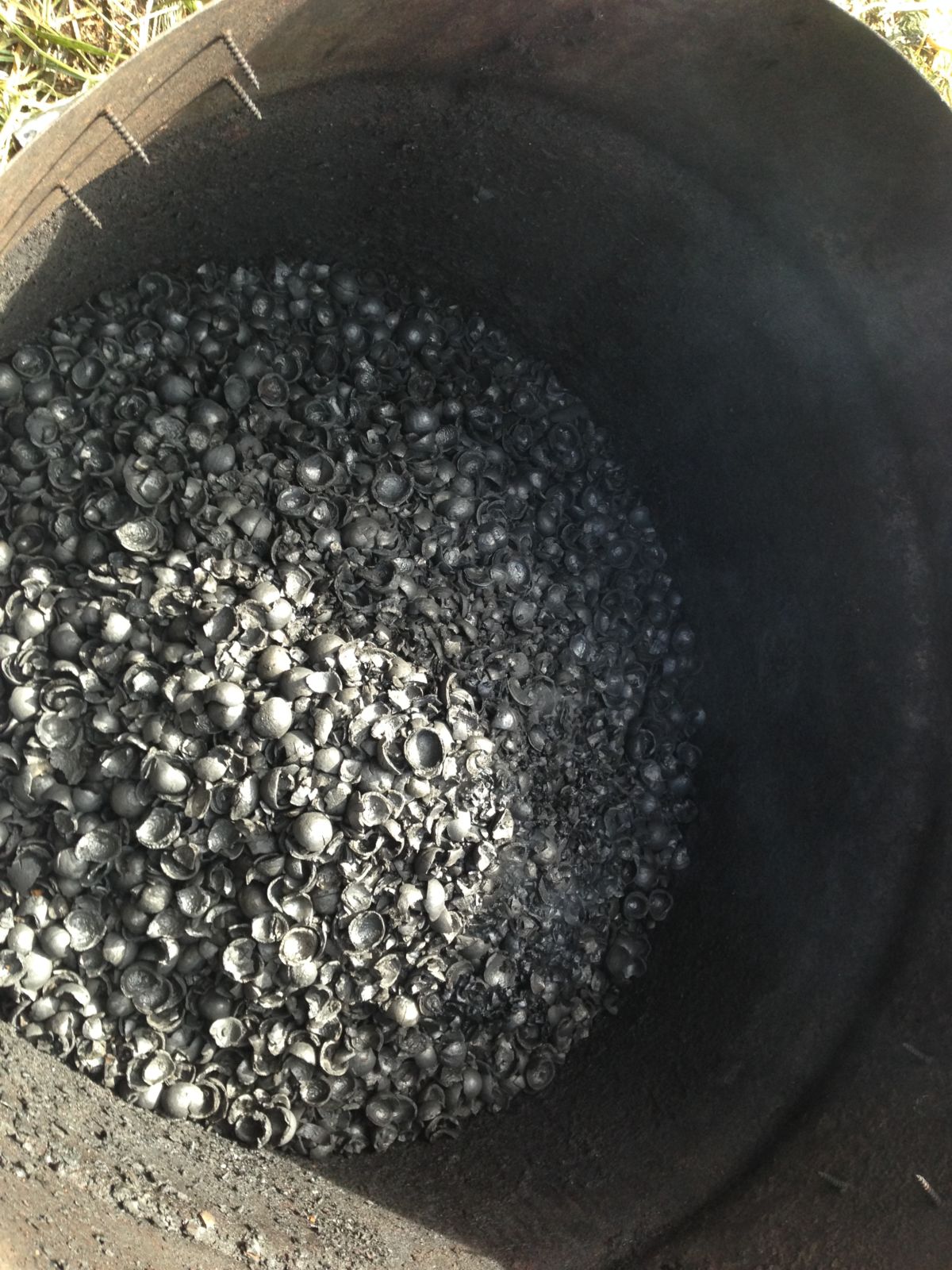 Macadamia nut shell after it has been pyrolyzed into biochar.

The macadamia shells flowed well without bridging in the hopper. They would readily flow through a “day bin” with relatively shallow wall angles, perhaps as low as 45°. The kiln uses augers to move material into, through and out of the process. These augers utilise both solid flighting and ribbon flighting as well as paddles to mix the pyrolysing material in the kiln. We did not experience any significant handling issues with any of the augers or mixers.

The macadamia nut shells charred very well. Process temperatures were high, signifying a highly combustible material and ideal process conditions. Maximum temperature achieved in the gasification chamber was 1009°C with the average being 839°C. Flare Temperature averaged at 896°C. Ideally, flare temps should be > 400°C to burn off any volatiles. Temperatures had to be controlled using water sprays to avoid excessively high temperatures.

There was no visible smoke discharged from the flue, and we are confident that any emissions will be well within acceptable emission standards however emissions testing will be required to confirm.

Macadamia shell Biochar yield was calculated at 30.4% which meets the target yield for biochar production through our process. Biochar temperature averaged approx. 297°C . This is a little on the low side, temperatures of 300–450 °C generally produce a good quality biochar. Increasing the pyrolysis temperatures would help with this problem as well as crushing the shells into smaller particles to increase the surface area. It should be noted that the trough temperatures were slowly rising with time. Considering this was our first experience with processing macadamia shells, we would need a larger quantity to enable a longer run time to enable us to achieve a true steady state condition.

Energy produced was approx. 500kW of heat. Any calculations of useful heat would have to account for heat losses through the kiln walls.

The trial demonstrated that: